Thoughts on Artwork, Documentation and the Internet The majority of people who come across our work and that of many other young artists around the world do so online. In many cases, it is not possible to experience their work first hand in its physical form; therefore it has to be translated through documentation on screen. How can the artist work within these boundaries to best represent and communicate what his or her work is?

By putting documentation of work on our website we have found that the work comes to feel more ‘real’: archived, providing evidence of its existence, certified and making it available to a wider public indefinitely. What do we mean by more ‘real’? The word reality derives from the Latin ‘realis’ – ‘relating to things’. What makes the Internet more real in some ways is perhaps its all-encompassing fundamental quality; almost everything in our physical reality exists within it, albeit an imitation. The Internet is a mega-context, providing its users with a multitude of potential experiences. Physical reality cannot achieve this in the same way, deficient of the key facilitators for such an experience: quantity, speed and accessibility.  When exposed to a wider public, something advances from merely forming a part of an individual’s reality, partially constituted by the imagined, to a social, collective reality that can confirm the existence and validity of something. The visibility and openness of the Internet supports and encourages this confirmed reality. Without this last stage the work does not feel finished, not properly brought to conclusion by this ultimate exposure. The work enters a global, universal reality and becomes part of that omnipresent, incorporeal existence that is the online. 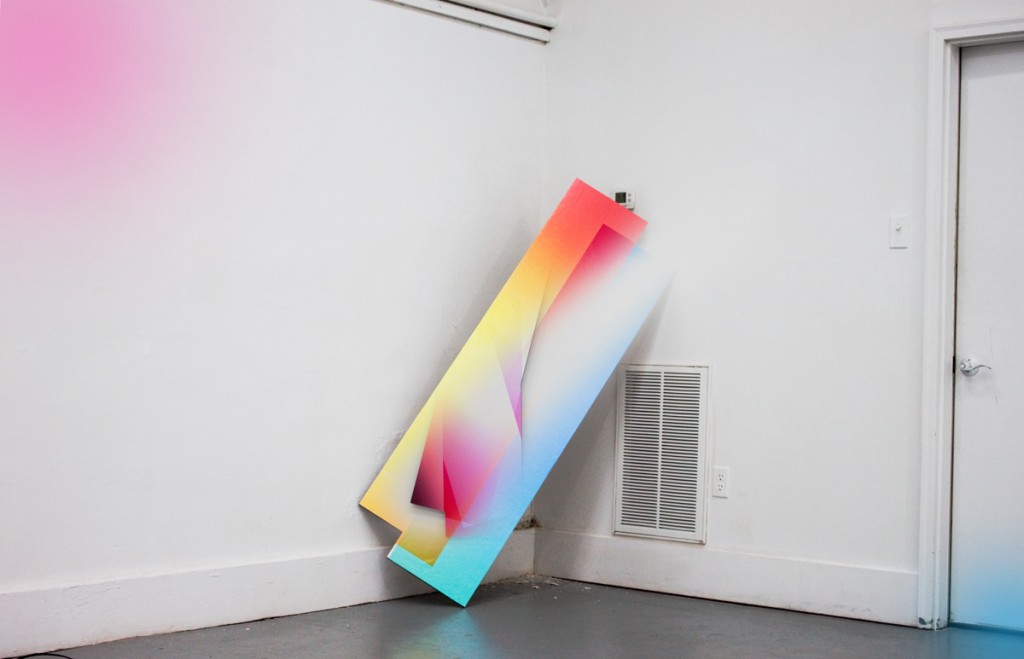 The Internet could in this light be considered the final, or ultimate context for work. Ultimate as in the end of a process, the final stage of the work, but perhaps also the better, superior? Representing work online gives the artist a second chance; images can be manipulated, enhanced, altered or emit aspects of reality that weren’t necessary or attractive. The artist directs this updated, improved version of the work; potentially to the extent where the documentation better represents the work. These renderings of work may be closer to the intention or idea of the artist than what was physically possible. The Internet provides a context for these refined versions of work and may therefore be considered superior. Artie Vierkant plays with the relationship between physical objects and their documentation in Image Objects[1]. The work consists of prints of digital files mounted on a wall. The subsequent documentation of these pieces are digitally altered, adding colour and shapes etc. In turn, these updated versions become new works. The documentation of this work doesn’t directly represent the physical objects but instead broadens and highlights the gap between the two.

The Internet lends itself to distraction.  It is beyond comprehension and does of course induce ‘scrolling on’, habitually dismissing images or information that is seemingly not worthy of our attention. If we at times experience work, in physical reality or online, it is, as stated in the dictionary, ‘an occurrence that leaves an impression’ on us. An encounter on the other hand is something or someone that we ‘meet unexpectedly and confront’. When viewing work in a physical space it is potentially easier to be more generous with time, allowing an experience of work to take place, embodied and ‘slower’ as it is.  Whilst on the other hand of course experiences of work online take place, the chance of works being only encountered is higher. Online presentation of work is so sensitive in this respect; too easily it can become an encounter as opposed to an experience, with the power to undermine the value of the primary artwork. Online presentation that communicates well is as such a crucial aspect of how the work eventually exists. Documentation of work is separate from the physical work itself, but nevertheless it too offers the possibility of having a profound experience. Oliver Laric states in an interview with Domenico Quaranta that, “Walking around a sculpture and viewing a single perspective in a catalogue are different experiences, but both are authentic and vivid”[2]. The documentation of work needs to be able to exist on its own, separated from and as a substitute for the work. How can the artist present work online that conveys the essence of that work, and which lends itself to being an experience, as opposed to an encounter?

The artist Tino Sehgal makes live performances in museums and galleries, often directly involving the audience. What differentiates Sehgal from many other artists is the way he refuses to document his work. For Sehgal the embodied experience of the audience/participant is primary, and he fears that documentation of this work could destroy the live experience. “If you make live work, once you start to produce secondary material it becomes a primary thing”[3]. This illustrates a risk associated with the Internet as well; the primary, physical work becomes digitized and potentially transforms what is a secondary reproduction into the paramount form of the work. Instead of images or videos that potentially completely misrepresent Sehgal’s work, the way he intends us to engage with it, other forms of communication take place. These are in the form of articles and reviews, or through conversations. A mystique builds around the work - What is it like? How does it work? – encouraging the audience to use his or her imagination.  Online, what we are left with is a trail of articles and the odd bit of footage to interpret the work. This way of accessing Sehgal’s work may capture the essence of it more genuinely, be more truthful, more engaging, more of an experience.

As with anything represented online, documentation of artwork offers a very limited, constricted view or point of access to the work. Like seeing images of a place you have never been to, seeing documentation of work online can’t depict the totality of it. Of course as artists we have to consider the documentation of work carefully, but to what extent can we do so? Can we be even more resourceful in making sure that the confined view of work that we offer an audience is as relevant as possible? Best Value[4] is a work by Timur Si-Qin. It is a sculpture that comprises 16 plastic boxes containing water and electrical extension cords. The documentation of this is particularly interesting. Si-Qin has created a slideshow of photographs, and a short video clip where someone pours water into one of the plastic boxes, these are placed over the music video Swag OD by Soulja Boy feat Lil B. The music is aggressive, enhancing the aggressiveness of the piece itself; it angles the work more pointedly in this direction. The time element that the video brings also makes us view the photographs more intently. At the edges of the video, strips of the music video behind are visible, they bring movement to the otherwise (mostly) static representation of the work. Together with the rhythm and sound of the music the work becomes energized. The documentation adds to the work, there is something extra, an additional entry point that potentially gives an audience more of an insight, depending on Si-Qin’s intentions for his work. This documentation certainly offers one type of experience of it in a very generous way.

Kimi Conrad is an art practice whose documentation of performance-based works in many cases differ from the traditional photo-realistic image or straightforward video recording. The documentation of LLAUNCH EVENTY[5] comprises a small number of photoshopped images. Some of them depict people and what appears to be some form of action that can be discerned through a dark grey, blurred layer. As an online visitor and with no physical experience of the work it is to say the least an enigmatic representation of the event. We can only imagine what it must have been like. These obscure images do just that; entice us to imagine, in a more inquisitive and engaging way than what a realistic form of representation perhaps could. These images aren’t purely renditions of finished work but in a sense they are re-made in a new format, held together by the essence of the work. It is easy to overlook documentation as being a ‘dead’ process, simply a way of recording what is already finished. Fundamentally documentation can never be completely transparent or give the viewer a direct, total experience of its physical version, it forms a layer, andis a translation. We need to be aware of what kind of layer we place between the viewer and the work and to what extent it enhances or detracts from the essence of it, making sure to capture the properties without which the work would not be what it is. Perhaps we must not view the documentation as a separate entity merely mirroring the physical state of the work, but as part of the making and conceptualization process. It can make us think more carefully about what the work is, ultimately furthering how we understand it and helping us communicate to an online audience.