Review: If Our World Protects 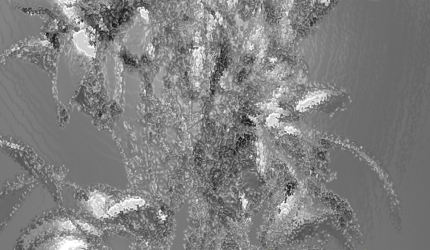 If Our World Protects begins with a taunt: an exhibition statement that could just as well double as a riddle about the non-location of the anonymous person writing. Here’s a hint: R, G, and B are touted as real colors, while Y is not. Instead, Y is seen as the mystic container for a shared sense of fun and misadventure. Here’s another: an invitation to go on one of those misadventures is met with immobility. The crowd is not lazy, so here’s an answer: the immaterial, the digital, and all else occurring on a screen are real, while us poor rubes caught up in the throes of print and living aren’t much more than shadows.

But then it’s not all that simple. In the sense that the works shown inspire a meandering sort of sublime, vaguely theological, or ontological reflection, it could be argued that the Lenox Twins are toying with art historical flagstaffs, and pseudo-religious iconography as part of their quest to blur the distinctions between the artificial and real. What was that yellow paint-caked Buddha, and his equally yellow mise-en-scène set atop a floor mirror, but an investigation of separate dimensions - object, reflection, shadow, and (in this case, given the casting of reflection onto the ceiling) projection? What were the three Satellite Sketches but the abstracted and reverential signs of a post-apocalyptic Lewitt-Christianity, all textured with god’s-eye photos of the Earth to look more akin to some strange, heat-seeking, bacterial interpretation of marble? And lastly, what were the three rendered prints framed in yellow, and treated with kitsch filters, but a mirrored, forward-looking reference to the stillness and passing of time in Dutch still life paintings of old?

While the works shown are caught up in the skin-deep appeal of the proverbial Art Object to the point of sharing more in common with fashion, it would be incorrect to say that they are merely eye candy, and to then call it a day; sex appeal alone does not a vapid thought make, and use of common tropes in and of itself is in no way a detriment to work that is consciously using said tropes. Given their internet-aware sensibilities, their references to art history, and their preference for an application of gloss so thick that it’d make a lipstick-smeared Jeff Koons toss on a pair Oakley’s, the artists share more in common with the vein found in one of the more visible subsects of internet art, to which their contemporaries Lauren Elder, Brian Khek, Micah Schippa, and AIDS 3D also belong. In a sense, If Our World Protects is the polar opposite of Jon Rafman’s Brand New Paint Job - just instead of texturing an environs in old art, the Lenox Twins are essentially gilding old art with the rendering capabilities of modern processors.

Utopian, yes, but it’s not impossible to embrace an aesthetic that cherishes technology while at the same time remaining critical of it. If anything the work is poetically leaving those choices up to us.