Post-Digital Being There: Werner Herzog, The Cave and Me 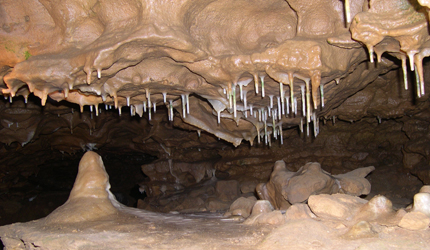 The character of Kaspar Hauser is one I continually look back upon when questioning my Being. Enigmatic, as the title of Herzog’s film suggests, not only because of his puzzling nature, but because of what is hidden within him. A cave dweller, uneducated to our ways, a man locked in a dungeon throughout his young adult life and suddenly set free into society not knowing how to walk, speak or respond to anything at all. His truth is simple, or perhaps more complicated than we could ever imagine. A misunderstanding of an apple’s will to roll farther than expected by its thrower questions the logic of logic itself - questions the will of objects and tools, especially post-digitally. As Kaspar learns how to speak, he talks of his unhappiness with the world he lives in now, with all these distractions.

“Mother, I am so far away from everything.”

He says to his adopted mother in the real world. Dimension pervades him, he senses the walls of a highly advanced networked society compared to the depths he had been living amongst. Themes in Herzog’s 1974 film run through to his most recent Cave of Forgotten Dreams. From the isolation of a cave, not unlike the allegory of Plato’s Cave, comes a madness of phenomenal psychedelic possibilities. The representation guides the spirit, or post-spirit or whatever you want to call it. Kaspar Hauser reached the end of the world amongst society, but in his cave, the world was groundless; an image. The sophistication of the Chauvet Cave paintings in Cave of Forgotten Dreams allow us to relate with a human being 32,000 years ago during a time of limitlessness; pure clearings of unknown worlds, a never-ending net. Both caves are portals towards a nearness.

The cave painters’ known world was extraordinarily tiny compared to how vast our networks are today. Their unknown world, however seems much larger than ours.  Time and history did not exist for the painters - the passing of 5,000 years was just as possible as the passing of 5 days. Time did not intimidate them, the ego was concave. Unfathomables existed, time stopped and started again, anonymity bred creativity. The cavemen were living brutally post-digitally. But how much more is truly ‘known’ today than was in 30,000 BC? Are there not still peoples, places, ideas that we will not uncover - isn’t knowledge, especially amidst the influx of smart technology and failures of Artificial Intelligence, a means of understanding (the image) than mastering (all images)?

“The frantic abolition of all distance brings no nearness.” (Heidegger)

Nearness is akin to knowing oneself - the age old question of “who am I?” that seems to linger behind every thought, behind every time you say “O-M-G” out loud. And is OMG just the onslaught indicator of our “Ah Ha” moment - The answer to a puzzle, the truth being revealed. The new proximity - diminished sense of space, bigger ‘personal space’, gestural acuteness - after effects of a rush of minds towards the same outlet. Fear drives the scurry, an attempt to educate that backfires as any mass education will. But fear has no place amongst the unknown. We must not forget the intentions in recent new technology beginnings. Imagination is what drove technological progress and what it strived for, a greater uncovering, to heighten experience. That experience has come to a halt for many internet users, unbeknownst to them. Multiple studies have linked excessive internet usage with forms of depression and anxiety, contemporary diseases of the mind. The internet can be a stifling tool if used improperly, a tool that was meant to expand the mind is now a form of validity for facts, emotions, social status, etc.  The internet is an aid in our questions, a vehicle for discovery, not an end all to end all. With no unknown, we are each individually in power. But the joy and mystery of life comes with powerlessness, something that loomed over the internet in its early days and still could. Incorrigibility is our biggest threat. For example, Descartes’ “I think therefore I am”, could now be “I surf therefore I am” - a sense of entitlement and power that is uneasily rooting itself.

Kaspar Hauser was thrown unwillingly into a world of infinite blockades, changing his perception of nearness/farness. The net, like Medieval society for Hauser, muddles the nearness into a farness, into a Thrown abyss. Has new technology thrown us too far? Do we flow with reality, or are our instincts and world views becoming increasing detached and unaware of what we don’t know? Heidegger’s term throwness is a primordial banality of Being-in-the-world which had long been overlooked by metaphysical conjecture. We are thrown powerlessly into a world that was there before and will remain there after we are gone. Hauser’s thrownness into the world is not unlike the effects of the post-digital, the net being our all-encompassing Thereness. Being there is being amongst, even amongst oneself. The net is a reflective thereness where we understand one another through ourselves, eventually coming to not be ourselves, and surrender our existence to an amorphous ‘Theyness’. The net went from isolation to ‘they’ in a blink of an eye.

‘They’ is also a desperate archive, a view, a window, an example - not experience. In Herzog’s Cave of Forgotten Dreams, he uses new 3D film technology to imitate the actual experience of being in the cave and seeing the artwork with the depths and movement of the cave walls. This could be seen as an attempt to merely record the cave in the most realistic manner, but paired with the image of the film crew themselves, a meandering conversation with a perfumer (amongst many other perplexingly open ended interviews) and Herzog’s poetically quizzical insights, it’s apparent that the film is itself a cave for thought, where isolation and theyness do not exist. Tumblr archives without meaning, a powerful tool of recognition, but a foray into a pit of options that hits a brick wall. With this new ‘live’ form of the archive, too many options create disinterest. The archive becomes proof of whatever, of a crazy lady filming a rainbow in her backyard - which is quite a poetic gesture itself - but when imagined as a minute detail in the scheme of what has been archived on the internet in the past 20+ years, is a schizophrenic file to put away and never be touched again. “Pix or it didn’t happen” is our new slogan. Proof, even if photoshopped (especially if photoshopped?), count as monuments of activity. No pix, no monument, no possibility. In ways this stretches our imaginations, but to a point of pointlessness - we cannot reach the cave.

” …Heidegger continually speaks in this text of Dasein, of Being there, thrown in history, as the situation of the cave.  The cave… was the name that Heidegger gave to what he had earlier called “falling into the one” …  This is the central metaphor of his decisive contribution about mortality.  Mortality, he says in Sein und Zeit, is everyone’s else’s, a statistic.  It is only when each of us recognizes her personal mortality – her being toward death – that an authentic life becomes possible.” (Alan Gilbert, 2010, Breaking News: the cave, Heidegger’s national socialism and Leo Strauss)

But authenticity comes in stages, much like the lifespan of a digital native from pre to post-digitalness. The situation of the cave starts with the state of mind - the cave dweller, the digital native, and the immediacy of their surroundings. The initial encounter with the shadows creates a life of possibility, childish wisdom and warm truth. A first computer, an early gaming system, an experience of awe and awakening. Chained to this experience, we know nothing else. But, with the removal of the chains the shadows become truer in comparison to the object itself that creates the shadow. The dweller may even believe it is the shadow that creates the object - it is the groundless nature of unbridled technological experience that has created a grounding, a factual basis for the initial experience itself, reflectively. The internet cafe, a largely abandoned mode of being and using, acted as an unshackling for many by bringing the shadows into a public arena. Unchained, the dweller, the native, ventures outside the cave into vastness. Truths of the vastness do not occur all at once, but among a dwelling where the truth lies in the most unhidden. Social computing, as in the public usage model, is an unhidden constant reminder of the human body, of other’s similar experiences to yours. Striving to rekindle the initial personal and almost sacred digital experiences, one must gain power again and eliminate the competition. The internet cafe quickly disappeared and computing was made private, isolated once again. From there comes the descent into the darkness and hiddenness of the cave - our beginning. With the “computer room” as our new cave (and this could be a physical or metaphysical room), we become nearer to our own kind. At our most inhuman we search for knowledge in familiarities and attractiveness, often masquerading as a cultured uncovering. This is the deepest shadow we will fall into, the net as the shadow of the unknown. It floats, dips about reality. At times the net can be a wall of sameness, a corridor of nothing - but if used in accordance to the passions and anxieties of a post-digital Being, the internet is yet another cave within a cave of possibility. The shadow of the cave painter dancing about the cave walls. Anxiety, a compulsion to live, to understand, is a necessity of using the net with stride, with chill perseverance.

Post-digital is a world view, an understanding of Being. It’s easy for the intentions to slip and become hasty, to rush through time in an effort to know everything all at once. If all distances in time and space are shrinking faster and faster, a concept of technical gestural absurdity seems fitting, an amalgamation of post-digital concerns. The insights of Kaspar Hauser are often absurd, Werner Herzog himself being a humorous figure and the concept of the cave itself being one of complete illogical foolishness. This is the gravity of unconscious thought. The work of Krist Wood is a fine example of the sober absurdity the post-digital mind leans towards.

“Thus we shall never experience our relationship to the essence of technology so long as we merely conceive and push forward the technological, put up with it, or evade it. Everywhere we remain unfree and chained to technology, whether we passionately affirm or deny it.” (Heidegger, The Question Concerning Technology, pp.287)

The essence of technology, the net, the post-digital, is not technological. It is experiential, brutal and human. A post-digital world evades history, much like the time of the Chauvet cave paintings, of Kaspar Hauser’s initial dwelling and of my own timeline of who what where and when.

I leave you with work to accompany the above essay, some informal, poorly recorded, but all of a brutal truthiness.