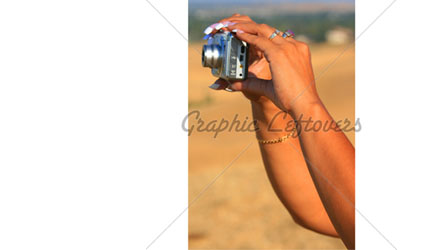 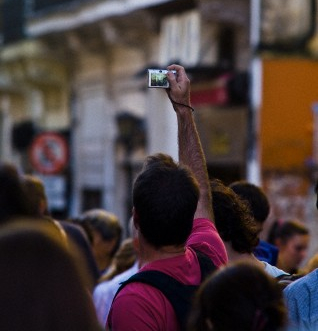 One of the main features of modern digital cameras and camera phones is the inclusion of the LCD (Liquid Crystal) Display, providing both real-time preview and immediate feedback of the cameras view. As a result, the physical relationship between ourselves and the camera has shifted from the old model (pressed against one eye) to a new position at the end of our arms reach, or at whatever distance is most comfortable, taking into account an individuals eyesight and viewing preferences.

This technological innovation reconstitutes the image as a physical object, situated within the context of what it represents, rather than the old analogue cameras where we experienced the image surrounded by black as we squinted to exclude the intrusion of light from the reality beyond the frame. As a result, we are able to directly compare reality and photographic representations of it.

The image has become a physical object, graspable, it no longer appears to us in a void. There is a crisis in the value of a photographic image, these new technologies (in addition to taking the camera away from our faces and out into the world) have devalued the singular, auratic moment of decision which previously characterised the photographic image.

They have also eliminated the delay between shutter click and getting the film back from the developers, producing a constant stream of images per second the whole time the device is switched on. The only distinguishing feature separating the frames of the preview image from the real photographs being the difference between display resolution and the saved image file resolution. An excess of choice characteristically produces and unwillingness to choose, and seeing images directly compared to what they represent throws the superiority of the real world into relief.

We experience a double vision/version of reality. Visual and virtual, a physical version, and a digitally reflected flat version. - But how do the values and characteristics of the two change as we live more and more in a conflation of the two? Another transformation has occurred in terms of how we use these devices in the sphere of public, collective experience. Finding yourself in a crowd of onlookers in some public spectacle, the number of people capable of actually seeing whatever disturbance or attraction was previously limited to those directly in front of it, the view of others obscured by people’s heads. In the above image, we see spectators using their cameras as a to overcome the density of population and extend their vision with the help of the device. In this sense, the camera becomes a third eye, extending the field of vision and magnifying the resolution with the use of zoom lenses and higher pixel counts.

The number of useful applications for the digital camera has expanded outside the limited sphere of photographic documentation for the sake of memory, sentiment or aesthetics, and now encompasses a wider range of social functions. The use-value of digital photographs has often expired as soon as they have been viewed, or shared.

“In the digital world, spectators become navigators wending their way through a variety of interactive experiences, and images become spaces of visualisation with more and more intelligence programmed into the very fabric of communication processes.” - Ron Burnett The possibility of creating an almost infinite amount of images of the same subject often has the unfortunate effect of nullifying the event itself, yet it seems we take more pictures than ever before. I find myself living more and more through this LCD screen, documentation of this kind seems to produce nothing but stream of images, their differences so slight that aesthetic preferences become irrelevant, and the event itself is reduced to nothing but a series of differently flawed reproductions. When technology comes to a point where its representation of reality is so self-evident, it seems to loose any usefulness. In 2009 Nikon launched the first compact digital camera with a built-in projector. The benefits of this new system (according to Nikon’s recent Tv ad campaign) include sharing holiday photographs together, projecting a photograph onto the wall after taking it, allowing for immediate collective viewing, projecting images onto people, allowing for infinite mirrored reflections of reality. It allows for individual perspective to be layered back onto its subject and so on. It seems we never get bored of our own faces. Although perhaps we prefer a still image of reality to the real thing, to observe, to consumer - it is manageable, finished, fixed, recognisable, familiar, but not the same. “Needing to have reality confirmed and experience enhanced by photographs is an aesthetic consumerism to which everyone is now addicted.” - Susan Sontag (from ‘On Photography’) Narcissus saw a reflection of himself in the water and fell in love, without realising that it was his own image.

Every time he smiled, the reflection of himself smiled back, anything he did, it reflected back, yet when he tried to touch the reflection, his vision broke up on the water and disappeared.