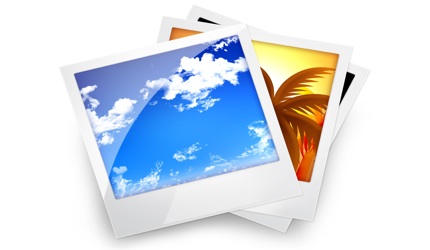 JPEG/Exif is the most common image format used by digital cameras and other photographic image capture devices; along with JPEG/JFIF, it is the most common format for storing and transmitting photographic images on the World Wide Web. These format variations are often not distinguished, and are simply called JPEG… JPEG should not be used in scenarios where the exact reproduction of the data is required… JPEG is also not well suited to files that will undergo multiple edits… The compression method is usually lossy, meaning that some original image information is lost and cannot be restored. - Wikipedia

Photographs are created, disseminated, digested and redistributed at volumes as yet unseen in human history. Vacations, momentous occasions and everyday occurrences are more likely to find a home on Flickr than they are to find their way into a frame or album and, more likely yet, to be stored on hard drives ad infinitum. Indefinite storage of large quantities of image data is both economical and practical—creating a situation in which one can conceivably capture and store more images than there is time to review or archive in any meaningful fashion. The act of capturing, sharing and archiving images is encouraged and expedited by nearly every aspect of contemporary culture, yet the basis of our persistent and evolving impulse to photograph is often taken for granted.

No single creative act is more often equated with memory than the act of taking a photograph. In contemporary culture, a JPEG is often the result of this act. Current thinking on memory creation and retention tells us that human memory, not unlike the JPEG, is not a tool of precision but rather of subjective storytelling and retelling by way of complicated associative functions with exponential and unavoidable lossiness. The JPEG is, at its core, data, and it is only when this data is called through the mechanism of a computer that it can take the form of an image.

The technologically mediated nature of contemporary photographic practice leads to automatic and perpetual storage. That is, images that would have been discarded in the days of the glossy 4″X6″ end up being saved and stored indefinitely and whether intentional or automatic, the saving and storing of these images imbues them with an aesthetic and psychic value, albeit shaky and unarticulated. Human memory is trumped by digital memory while digital memory as a concept remains elusive to most.

Somewhere along the line, our language around the act of photographing changed. We went from making or taking a photograph to capturing an image, signifying a transition from an act of agency over the physical to a happenstance interface with the immaterial—a kind of accidental parcelling of seemingly unintelligible data into readable images. The technological evolution of consumer-level cameras reinforces this shift; favoring the automatic over the manual with an emphasis on the similarity and predictability of photographic output.

There is cultural significance in this shift. Ideologies—political, social, aesthetic, etc.—evolve out of new ways of interacting with the symbolic language of technologically mediated images. If image-making remains a reflection of our endeavor to concretize the ineffable and elastic nature of a subjective experience of time, can the formless nature of image as data serve as fodder for a new philosophy of image-making?

Acts of alteration and/or publishing free image data from this seeming inertia, allowing it to manifest new forms. The image as data is viewed, augmented and published within networked space, allowing for a multiplicity of potential and simultaneous actualizations. While the JPEG in its original form may find its way back to its particulate existence in perpetual storage, the ever-evolving publishing potentialities available for digital images (blogs, photo-sharing websites, online self-publishing services, custom photo rugs, baseball caps, mouse pads, etc.), produce new and significant cultural information disseminated by way of the original’s interactions and associations online. Rather than remaining a vessel of static meaning, the image, via immaterial interface, potentially gains associative and/or additive meaning to become a more efficient and faster evolving conveyor of culturally significant material.