I am Such a Failure: Poetry On, Around, and About the Internet In the past few years, there has been a move towards artwork and writing that abandons irony completely in favor of sincerity. “New sincerity” has been a buzzword for the art and literary world since the mid 1990s. It was the name of a literary movement sparked by David Foster Wallace’s essay, E Unibus Pluram, where he cited the “new literary rebels” following the age of irony and passivity.  These rebels “risk sentimentality and melodrama”; the  accusation of banality; “treat of plain old untrendy human troubles and emotions in US life with reverence and conviction.”[1] It’s an honorable, yet completely utopic, goal.

This interest, in the works for a while now, is most recently exemplified by the New Sincerity exhibition at the Future Gallery in Berlin, but also surfaces in the press release for Feature Inc’s July-August show, titled I AM NOT MONOGAMOUS, I HEART POETRY. The curator is embarrassingly open about his choices for the exhibition and divulges his experiences with a therapist, even patting himself on the back for doing so; there’s something confident about his tone.

“from fall 05 to fall 06 i went to a shrink to help figure my way thru some anxiety i was experiencing. the two things from that shrinking that i continue to reflect upon are process resistance / outcome resistance and, from a long-winded rambling about my range of sexual interests, the amusing awareness of a parallel between that and my gallery’ exhibition program…while we move even further into this age of information, poetry becomes an increasingly important way to help create balance. the limitations of the brain are becoming clearer, intuition and feelings offer other ways to progress.”

The curator vaguely identifies “intuition” and “feelings” as avant-garde strategies. He sets up a dichotomy between “feeling”/ “poetry” and the “information age”, roughly equating poetry to ‘feeling”, assumingly positing it on the opposing end of the “information age.” He argues that poetry might create a “balance” in the coldness of our technology-driven times. As a result, “poetry” is assumed to possess feeling or intuitive qualities. He seems to suggest that poetry is the way to fight slick, ironic artistic tendencies. Similarly, in the New Sincerity press release at Future Gallery, curator Jaakko Pallasvuo tentatively suggests that the works in this exhibition are “honesty at last; a hot knife through post-ironic butter. [But] perhaps just another borrowed pose, quickly returned.” Post-irony, as I understand Pallasvuo using it, as opposed to sincerity, is a strategy that still steeps itself in irony, uses it as a jumping off point. Therefore, “sincerity” is somehow something completely new and different in the context of art concerned with the Internet and our relationship to it. Pallasvuo suggests that “sincerity” is what will finally slay the old and cold, bitter and dry net art and what might be the “new casualist” aesthetic in painting.[2] Yet – obviously – nothing is 100% “sincere” / “authentic” and the creation of these categories is problematic. What is sincere is not opposite to what is ironic: many of Pallasvuo’s pieces, like much of today’s net art, leans heavily on a nostalgic affection for early 90′s internet and “folk” aesthetics (the title of his blog being DawsonsCreek.info). To me, constantly referring to a sort of overall objective nostalgia for the early Internet is yet another layer of distance placed between the artist and his intention. As viewers, we get in on the joke, which is a trademark move by ironists.

Some net art uses poetry and emotional content opposed to what I consider to be the predominant ironic, distanced, slick and surface-based aesthetic of the (art of the) “information age.” Perhaps as we continue to suffer from the Internet’s commoditization, alienating and distancing power over us, we are finding the positive parts of it. The parts that allow us to meet other people, and to be honest online about ourselves – or not. There is an extremely varied way of codifying our emotions online, and these artists emphasizing how we can defer our emotions through technologies, or at least face them.

The forms that “Internet” poems take are many, some with no manipulation at all (a screencap to “prove” things aren’t mediated, such as a gchat), to a casual stylization (drop shadow’d or scribbled in Photoshop, perhaps an attempt to include “the hand” of the artist) to elaborately rendered images. These artists create images that convey usually short, pseudo-ironic/ embarrassingly poetic and/or “sincere” short poems that, at their most successful, function like little monuments to feelings. How it feels to be in a relationship online. How the Internet arrests and limits our forms of expression; how we must distill our emotions to emoticons. Some of this art creates poetic/subversive image macros by placing anachronistic images with text. Text-based digital image creation runs the gamut, but on one end mostly groups around irony, humor, and cliché, and on the other, statements that feel more or less distanced, more sincere, poetic, and creative. Often, vexingly, the artists produce both kinds of images. The emo .jpg circulates quickly on the Internet, allowing for an endless appropriation of sentiment. Especially suited for a tumblr context, it is at once very personal and extremely vague; “I am sad”, “I hate myself”, “I am pathetic”, etc. On a social media platform such as tumblr, a new element is added to poetry: that of the viewer and the work’s Internet context. Reblogging Oldham’s ‘I am a failure and my reputation is ruined” allows a viewer to align him or herself with this sentiment. But what is Oldham’s intention? Does he really think he is a failure, and is the audience that reblogs his artwork empathizing with him? Is there space for “authenticity” in this work? Perhaps it is in the space of appropriation by others who identify with it. Other than this piece, the vast majority of Oldham’s work does not seem to be concerned with silly emotions or feelings, more with the intersections between digitally rendered and painted surfaces. There are no other (that I can find) “I” statements that seem to have any sort of affective echo, but “I am such a failure” is nonetheless interesting.

Maybe this cliché – “I am such a failure” – is a sort of hyper “sincerity”, a sort of over-generalization that becomes the only way we can express ourselves, rather than trying to muse metaphor or nuance. We feel anything that is short of immediate expression is ineffective, and so we resort to clichés. Placed on an elevated “poetic” platform, what might have once been a status update or a Livejournal entry is concretized into an image-poem. Emotion and sincerity are fetishized. Cliché statements result from frustration at our arrested abilities to express ourselves; the poems range from the pathetic, banal, and everyday to the sweaty and embarrassing. Digitally rendering feelings is one way to experiment with how our emotions are filtered through technology, whether those emotions are sincere or not and whether the artist chooses to make them so.

Alex Dolan’s “monument to blue eyed girl problems” is one example of an emotional image-poem that investigates ideas of sincerity and authenticity through a digital and poetic means. It is a virtual box to put those problems in, and so works to remove the artist from the image, confusing what we might consider to be “authentic” production. Furthermore, the image’s rudimentary rendering points to an objective “universal” nostalgia for early Internet images. 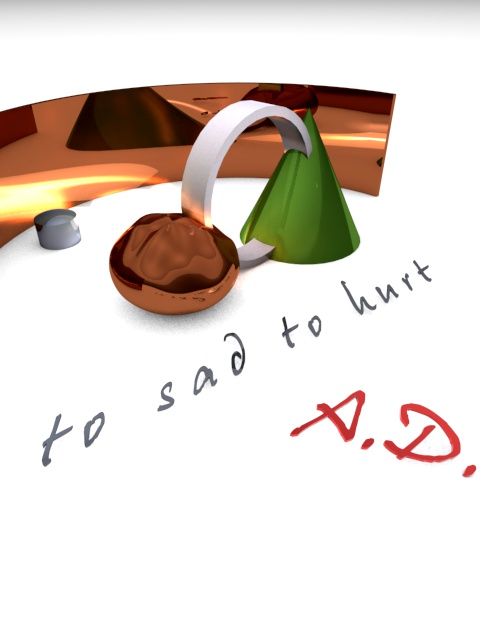 In conversation with Dolan, he spoke with me about the technological distancing that results from using digital software. “Because it’s a 3D model, it’s not as embarrassing or tricky. It’s some weird sort of seductive, extra smooth computer image.” He added that distancing is one technique he uses to allow himself to be more sincere. For Dolan, creating “scenes and tombs and fake objects [in Maya] authenticate the emotions.” Certain types of distance, whether ironic, technological, or aesthetic, provide the freedom to be sincere.  Warm and Naked is one of my favorites of Dolan’s works, because it relies on the friction between the sterility and coldness (literally blueness) of the digital image and the evocative nature of the text. It reminds me that my laptop is warm. I think about lying next to someone. It’s reminiscent of Chris Wool’s Lazy and Stupid and Ed Ruscha’s unattached sentiments. 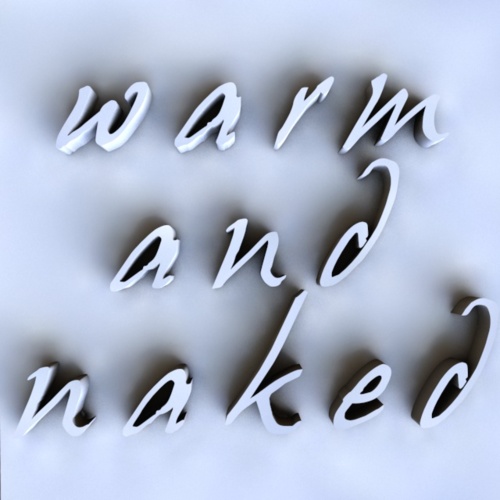 The author screencapped this work by Jared Boger in order to draw attention to the artists’ own stylistic choices in terms of blog formatting.

Jared Boger (jaredboger.tumblr.com) interestingly engages ideas around authenticity in his poetry, also favoring tumblr as a platform for his work, producing both screencaps and text posts. He told me, “It’s just a personal process/therapy that i might as well share,” but, like the more rendered images I mentioned earlier, Boger’s work is specific to its context on tumblr. He told me he “generally thinks about tumblr” when he makes something, although the work is not completed by viewers, rather he favors the screen capture as a way to facilitate discourse with followers, i.e. his audience. The screencap, which appears “unmanipulated,” provides an illusion of transparency to the work, a slice of realtime, although of course, the cap is often manipulated by the artist, which then may appear to behave as a product of digital self design, choosing your blog layout, font, etc.  Boger’s poetry is also reminiscent of Brandon Scott Gorell’s, whose poems are a kind of sleepy description, stream of consciousness, encapsulating the kind of intimate memory or moment involving a group of your friends–one that you don’t talk about it because it’s so awkward to reenter into — that rule of not saying, “that was awkward.” He often tacks on “seems really bad” at the end of his poems, effectively distancing himself from the emotion. In a similar way, Jared Boger’s poetry seems to be about feeling emotionally connected to technology, but deferring, alienating ourselves from our feelings, like how it feels to look through your Facebook to see if friends left you messages. Under a poetic form, this profanely banal experience becomes extremely emotionally fraught. Boger favors straightforward syntax, and this makes his poems a little embarrassing, and they feel sincere. It’s so sincere that it’s almost ‘cute’, in its middle class-ness, its Beach House and Love of Everything references. It holds nothing back. In the September 2010 Bookforum, in a “review” of Richard Yates by author Tao Lin, Joshua Cohen argues that one aspect of what it means to be a sincere or genuine person is to expose yourself online. “To Lin’s generation, which is to say to mine as well, transparency is the new sincerity; many of our peers maintain that it’s psychologically healthy, and artistic, to expose oneself entirely online. Anonymity was so 1990s—the Age of Fake Screen Names. Today, only utter exposure can set one free, while the only thing prescribed is regret.”[3] [my italics] Boger believes that it is important for one’s online identity to not only be very close to reality, but even to be a “more liberated” version of yourself. Maybe, then, the Internet is not a place for hiding, for irony, coldness and nostalgia, but a place that makes sincere, open, warm, and human gestures in art.