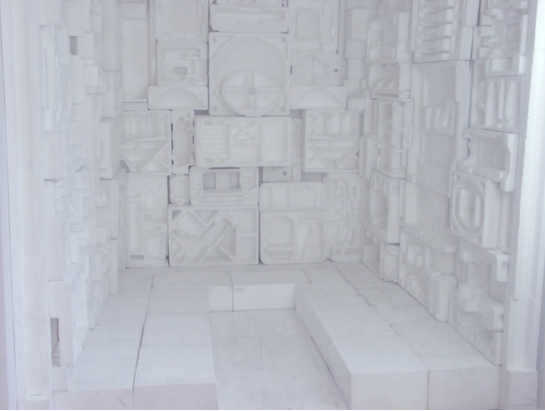 Patrick Meagher is a New York-based artist known for his Styrofoam sculptures made between 1999 and 2005 as well as the Silvershed art project space that he runs in Manhattan’s Chelsea neighborhood.   His work takes many other forms, though, including sculpture in multiple media, painting, photography, Internet browser-based work, diagrams, prints, video, and the artist’s book.  He is also an intellectual polymath with interests in mathematics, new age philosophy, Modern art and architecture, landscape architecture, computer science, and economics.

With all of these diverse projects and interests, there are many ways to read his work.  Several of these are included in the forthcoming monograph/artist’s book Digital Disorder Decades, which details the work he made between 1999 and 2009.

This text is another, focusing on the representation of space in his Styrofoam works.

Space is typically considered in three dimensions. One looks out onto the landscape or at an object and considers it in terms of surface and volume: length, width, and height.  But sometimes it can be represented in other ways as well.  For example, mathematicians can demonstrate models of higher spatial dimensions through the use of hypercubes, but these hypercube models are often opaque and, for an artist, aesthetically lacking.[i] There are other examples of space beyond 3D, though.

Time—the fourth dimension—has been represented in Cubism, Process art, Minimal sculpture, and, of course, the performing arts and film.  However, before (and after) Einstein’s theory of relatively proved that the fourth dimension was time, many artists were obsessed with a certain non-Euclidian spatial fourth-dimension that one could intuitively perceive, if not visualize per se. [ii] Duchamp’s work, for instance, could be understood as a search for the representation of this dimension.  As could the work of Louise Nevelson—a crucial formal and conceptual reference in Meagher’s work—who wrote a book entitled Louise Nevelson: The Fourth Dimension. The surrealists, particularly Breton and Dalí, also discussed these ideas, and, in a slightly different way, the artist John McCracken did as well.

Another way to approach this question, though, is through Bruce Nauman’s A Cast of the Space Under My Chair (1965-68) in which Nauman literally cast the empty space under his chair, resulting in a small, mausoleum-like structure that is at once itself (empty space) and not-itself (it nudges the viewer to perceive a chair).  In other words, it uses the empty space to create a portal through which to view another space that is not physically there.

With that image in mind, we can return to Meagher.

Patrick Meagher was born in 1973 in New York City.  His mother is Swiss and, with the exception of a few programs on PBS, she discouraged him from watching television.  As an alternative, he constructed model worlds out of the detritus of nearby construction sites.  He then attended a specialized math high school where he became fascinated by the Internet and the lively street art scene in New York.  His interest in Andy Warhol led him to study Fine Art at Carnegie Mellon University in Pittsburgh, where Warhol is from, and his interest in Joseph Beuys led him to study a year abroad at the Kunstakademie Düsseldorf, where Beuys taught.  He then received a Master’s degree in Landscape Architecture from Harvard’s Graduate School of Art and Design.

Meagher returned to New York in 2000 and began working with the discarded Styrofoam that was seemingly everywhere at the time.  As art writer Mary Rinebold puts it in her piece on Meagher in the Digital Disorder Decades book:

“Moving into the Fashion District at the turn of the millennium, Meagher observed Styrofoam packaging everywhere, especially in the corridors of lower Broadway, an area known collectively as Silicon Alley.  Mountains of this futuristic material littered street corners, surrounded garbage cans, and blocked building entrances.  At this time many households were investing in their first home computers, and these machines came wrapped in Styrofoam. Messy to break up and stuff into trash bags, large blocks of Styrofoam were thrown onto the sidewalks of New York, and Meagher began collecting every inch of it that he could find.”

Meagher uses this material in multiple ways.  In early pieces such as Corbusian Trauma (2000), for example, he positions the Styrofoam into a miniature example of textbook Modern architecture, lights it, and then takes a picture.  The resulting photographic print appears to depict an architectural space; however it is a space oddly emptied-out, as though existing in a dystopian science-fiction film.  The clean, blocky, yet functional forms are in disuse here, in ruins; yet, perhaps because of this, there is an alien beauty that pulls one in, forming questions on the tip of one’s tongue—What was here?  What was this ‘trauma’?

In other works, such as The Atria of Space Station Science Fiction (2003), Meagher combines multiple units of Styrofoam into small room-size installations inspired by the found material reliefs or “crates” of Louise Nevelson.  The canals and intricate formal patterns dug out of the Styrofoam walls perhaps remind one of H.R. Giger’s biological/industrial imagery from the film Alien (1979) or, through a different lens, the computer chip-inspired look of the film Tron (1982).  There is a small part of the elevated floor cut out, allowing one to enter inside.  Is this the control center of a futuristic factory or perhaps an ancient space of ritual and religion?  As in Corbusian Trauma, the function of these forms is a mystery, creating a mixture of absence and intimacy that draws one in.

Once the artist creates this mood, the viewer is invited to reflect on the materials, coming to terms with their origin as discarded Styrofoam packaging.  And, as this happens, a new type of space emerges.  The shroud of mystery hovering around the surface dissolves and, in its place, one views shiny desktop computers nestled into grooves of Styrofoam.  Like Nauman’s A Cast of the Space Under My Chair, a physical object is both there in space and an engine for projecting the space that once fit around it; in this case, a computer.

This is ironic when one considers that a computer is much like the Styrofoam packaging that protects it.  The complex forms and intricate shell of a computer are, in themselves, useless.  They are meant to deliver something else.  Staring into my monitor, I don’t just view a monitor, but rather a monitor and a window into the virtual.  Staring into the Styrofoam in Meagher’s installation, I don’t just view Styrofoam, but rather Styrofoam and the computer and, by extension, the window into the virtual that the computer opens up.   A space projecting a space projecting a space…

As personal computing has become commonplace, people regularly enter into this virtual space and navigate around without giving it a second thought.  Many people have set up virtual extensions of themselves on sites like Facebook.  And, yet, it is difficult to really see what this looks like.

Indeed, it is difficult to see what most things look like when they are right in front of one’s nose.  Use value clouds the ability to see things as mere things—objects in the world.

When one breaks something down, though—say a hammer—and removes its use value, it becomes visible as a thing.

Perhaps it could be said that Meagher’s space shows one what this computer space looks like by breaking down the computer, removing it from the scene while retaining its shell.

[i] This is not always the case.  See the work of Manfred Mohr for an example of an artist deeply invested in exploring the representation of the hypercube.

[ii] The art historian Linda Dalrymple Henderson’s The Fourth Dimension and Non-Euclidean Geometry in Modern Art (1983) is the most exhaustive reference on this topic.