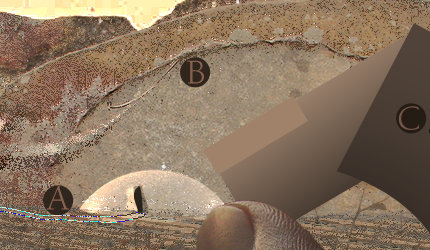 The Internet has been my greatest teacher in life. By that I mean much of what I’ve learned has been attached to the Internet. I don’t believe the things I’ve learned are new to humanity, nor novel, but I do believe I’m
in a place and time where my mode of learning might be new. The Internet has given me the opportunity to experience life in a remarkable way and in a way that I think emphasizes certain aspects of humanity while discouraginother aspects. So in a way these experiences are mine but they aren’t limited to me.

It seems to me that in all of these prior images of the Internet there is blindness, or accepting that I have eyes, an illusion, which causes them to fall short. This stems from a misunderstanding of the Internet as a place with itself. The Internet-as-ocean and sprawling city are merely surfaces which drape over a core. That core is the Internet by itself and that place is a desert.

While a desert can come in many forms there are similarities to connect them. The most prevalent would likely be the lack of life in them. Or rather a lack of quantity in life. Where an ocean implies a boundless quantity and a movement of life, a desert isolates and binds to what life it finds. To see the beginning of this shape in the Internet all I need to ask myself is “What lives here?” The answer is very little and I would go so far as to say that this Internet is a desert filled with only one life, mine.

… where might I find shade on the Internet? Where can I settle? Where can I create a habitat and comfort for my self? Those places that seem to allow some form of self limit the environment and in this way each site forces mere survival, not living.

As almost all things lack in this place so too does perspective lack. Like an ever present mirage my lack of perspective sits as the film which is both veil for, and portal to, this desert. It is not surprising-but definitely disheartening-to think that the Internet, as it exists now, cannot be removed from the mirage which colors my view of it. Indeed after all these misperceptions and misinterpretations I feel like I’ve been tricked by that cliché mirage, the mirage of oasis, and taken it to its extreme out of desperation. It now seems foolish to consider this place anything but a desert and my interaction with it anything but a mirage.

Among the many other illusions this mirage is capable of it seems that the most potent is its ability to form an image of itself as a city of people… I seemed to interact with many others, watching them grow and move. What I did instead was willingly give my water to the desert and watch it sway in the heat. The mirage gave me the illusion of growth and movement. There is neither movement nor growth here and therefore no real connection between myself and the silhouettes of this desert.

It seems to me that this mirage worked on the common belief that through the Internet any person could connect to any other person; that I could find someone to interact with living in any corner of the globe… Now I interact, presumably, with those people whom I know from the outside world, friends/family/colleagues. Their worldly selves acting as shell which the mirage uses to interact with me.

The mirage merely tries to distract me from the knowledge that every single person on the Internet is merely a mirage of a person who’s already given something to the Internet… It sits between me and the desert, and ultimately between me and any other person.

The mirage gives me the privacy of solitude along with the impression of connection so that I feel comfortable and appear connected to the people who interest me… but I recognize in some sense that I am alone, which makes it easy and preferable to speak, act, and give as if alone, yet I am fed the impression that I am with others, which gives me the awareness that others may see what is mine. It is my impression that this conflict will lessen as this place develops, for as it develops it will shrink further… In this way the mirage intends to evolve into the mirror. The mirror gives me a view of myself which is unavailable to me otherwise… In whatever way I seek to manifest my internal, the mirage would seek to act as a mirror of it in the hope of attaching itself to me completely so that my act of giving is never broken.